Video poker is a popular online casino gambling game that has taken the best from poker and slot machines. You can play this game on any device, whether it’s a computer, phone or tablet. The player's goal is to collect the highest hand possible. The higher the combination, the bigger the payout. If you have no idea of how to play video poker, go ahead and read this quick guide!

This video poker game uses a deck of 52 cards. All deuces become Wild Cards. In Deuces Wild game a Wild Royal Flush (regular Royal Flush with Wild Cards) is rated higher than in other video poker variations. The combination of four 2s is the second-highest hand after a Royal Flush.

This game uses a 52-card deck without Wild Cards. The lowest-paying hand in Jacks or Better is a pair of Jacks, Queens, Kings or Aces.

This game is played with a deck of 52 cards with an additional joker. In Joker Poker, Five of a Kind pays better than a Wild Royal Flush.

This video poker variation does not use Wild cards. The lowest-paying hand in Tens or Better is a pair of Tens, Jacks, Queens, Kings and Aces.

Popular video poker variations have a bunch of differences between them. 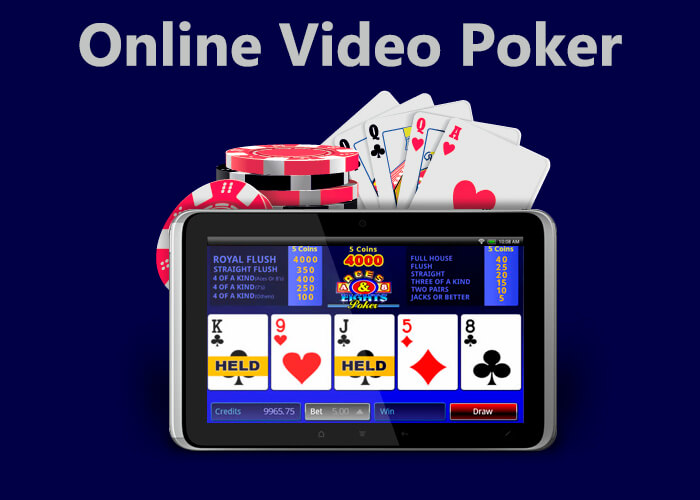 Some video poker machines feature the so-called Half-Double game where you can risk 50% of our winnings.

The outcome of a video poker game depends in part on the player’s actions and skills. Luckily for gamblers, there is an optimal strategy for each type of video poker game. And while none of these strategies can guarantee you a win, they can surely increase your winnings odds. Let’s take a look at the basic strategy for Jacks or Better: