The key feature of the Aces and Faces poker game has to do with special combinations for which the player receives a cash reward. Your winnings are determined by your bet size and card combination. All combinations are borrowed from classic poker.

How to play Aces and Faces video poker

Playing Aces & Faces poker is a source of new emotions while being in a cozy and comfortable home atmosphere. The game interface is very simple and straightforward. A concise menu and additional lobbies allow you to fully immerse yourself in the gameplay, without wasting your time on additional training and extra actions. The interface is available in English, allowing you to quickly understand the essence of the gameplay and easily get used to it. 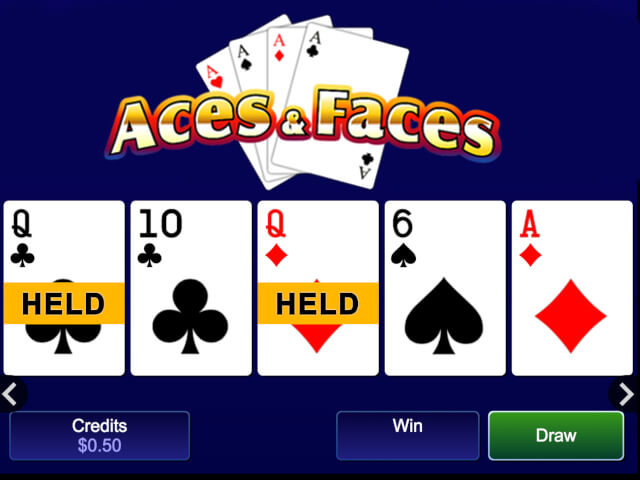 Aces and Faces video poker consists of several key fields, which include:

In total, there are 52 cards in the deck, starting from deuce (2) and up to Ace (A). All cards are generated by the system and drop out in random order, and the main task of the user is to collect one of the paid combinations indicated in the table.

If the combination is a lucky one, it gets highlighted in the corresponding row of the payout table, and a record of the amount of credited money appears in the information field.

During the gameplay, the player can adjust the bet size and select the cards to be replaced. At the same time, the system automatically tells the player which cards are best to keep. To keep a card, you need to click the Hold button on it.

When playing Aces & Faces video poker, you can collect the following combinations:

A distinctive feature of the Aces and Faces video poker is how the above combinations are paid. A special bonus in the game is the Royal Flash combination, which generates a juicy jackpot (4000 credits).

When you receive a paid combination, you’ll be automatically offered to play the doubling game. Click the Double button to accept. In the Doubling game, the gambler will have to pick the card of a higher value than the dealer’s card.

To deal cards, click the Deal button. To block cards, just click on the desired card in the central field. To enter the second round, click Draw.

Video poker Aces and Faces will appeal to all fans of gamble games online. This amazing game is an ideal combination of poker and slot machines. Pick a legal online casino and try your hand at Aces and Faces poker. Who knows? This casino game might make you rich!