Playson is one of the most popular gambling developers for online casinos that started operating in 2012. At first, the manufacturer was focusing on the European market only. But now they’re expand their business globally. At the moment, the company has offices in Malta and Ukraine and employs more than 300 employees. The provider operates in the B2B sector, working with gaming platforms and online casino operators around the world.

The company was founded in 2012. However, it became known only in 2014 when the company's developments were presented at the ICE exhibition. From that moment, the manufacturer began to actively take part at renowned international events, such as G2E Asia and EiG.

At first, the provider remained in the shadow, committed to strengthening partnerships with online casinos and bigger software brands. After striking beneficial with Microgaming, Quickfire, NYX, and other software companies, Playson began to quickly gain popularity. In 2016, the developer received the coveted UK license. Playson software is certified by Quinel M. Ltd. which ensures the honesty of gaming results and fair play. 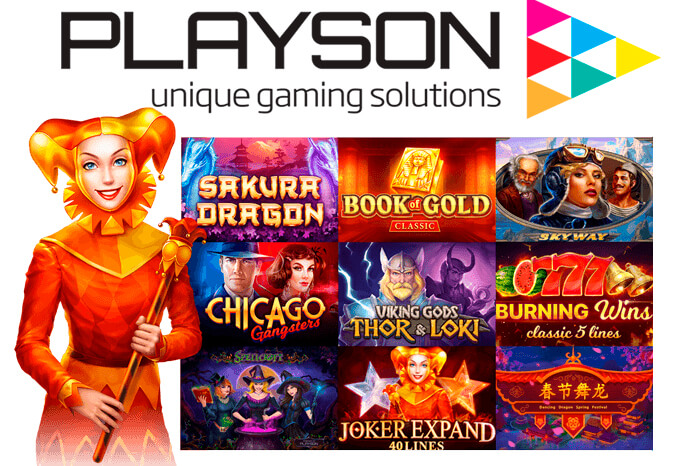 Now let's get acquainted with the main features of the iconic Playson pokies and other products.

Although the software company mainly focuses on online pokies, there are also several card games on its igaming catalog. Online pokies by Playson have various themes, such as:

Curious to take a look at the most popular pokies made by Playson? Here you go!

Down the Pub. This game is popular offers a great combination of three-dimensional graphics and juicy bonus games that bring additional multipliers. Gamblers are looking at an avalanche of money-making opportunities!

Viking Gods Thor and Loki. This machine has a whopping 4 quests that players need to complete. After you’ve completed the quests, the bonus round with free spins is activated. Also, the pokie has a Wild symbol and a special symbol that triggers multiple Wilds. Sounds good!

The Playson software developer is one of the fastest-growing casino software companies out there. Pokies of this developer can please even the most demanding gamblers. You can easily find Playson slots at legal Australian online casinos.